Karimu has been improving Ayalagaya Secondary School facilities for years. In 2012 we renovated three classrooms and constructed the first two-in-one teachers’ house to help increase teacher retention. In 2014 we built a second teachers’ house and a kitchen with three large fuel-efficient stoves, so that cooks are no longer in danger of contracting lung disease from cooking over open fires in an enclosed space. In 2017 Karimu installed solar panels at Ayalagaya, allowing teachers and staff to work and meet after hours and charge their cell phones without having to walk several kilometers. In 2018 we built proper bathrooms for boys and girls and a large sink for handwashing. The girls’ toilet was specially designed to provide adequate facilities for girls to manage their periods and feel comfortable attending school throughout the school year.

The success of Karimu´s education program resulted in a record number of primary school students passing the National Exam in 2018. Ayalagaya Secondary School simply ran out of classrooms to absorb all new students. In 2019 Karimu built 7 new classrooms and 3 small offices . Then, in early 2020, Karimu provided books and teaching material for all school subjects ensuring that every student has a collection of books for all subjects he/she is studying.

The improvements brought to the Ayalagaya school resulted in significant improvement in school performance. Back in 2012, only 26% of students graduating from Ayalagaya passed the National Exam to enter high school, causing 74% of its students to stop their studies at the end of middle school. Since 2017, more than 80% of Ayalagaya students passed the National Exam. The positive impact on female students has been even greater. Until 2011, girls rarely made 50% of the students in Ayalagay Secondary School. Since then, their share has been steadily increasing, varying between 57% and 60% in the last 3 years). Their performance has improved even more dramatically. Back in 2012, the difference between the number of boys passing the National Exam and girls passing the exam was 158%. In the last 2 years, slightly more girls passed the exam than boys. In 2020, 100% of Ayalagaya Secondary students passed their national exam! This puts them in the top 11% of schools nation-wide.

All these great results enabled Karimu to convince the government to expand Ayalagaya Secondary into a High School.

The closest high school in the area is 18 km (11 miles) away. To walk this distance daily five days a week is a hardship at the least and potentially unsafe, particularly for teen girls. Families who can afford it look for accommodations in Dareda Mission. This is a huge financial burden for the families, adding the costs of school fees, uniforms, school material, food and housing together. As a consequence, there is a dramatic drop in the number of students going to high school in comparison to secondary school attendance.

To help all school-aged children achieve their highest potential, Karimu, working jointly with the government, will expand Ayalagaya Secondary School into a high school.

The current project encompasses the remodeling of 11 classrooms and the construction of 3 additional ones. 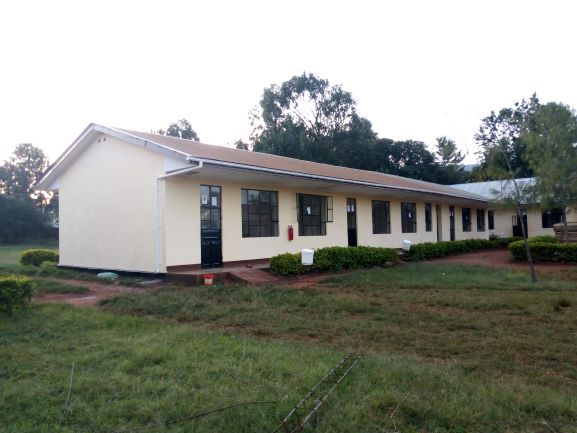 Each building will have

Cost: $57,776
As the community paid for the classrooms that we are remodeling, we are not expecting them to contribute to this project.