Karimu Begins With a Dance

Bacho, Tanzania: Two men, local Karimu manager Joas Kahembe and his friend Marseli Kwaslema, sit across from me in the common area of the Agricultural Training Center where we will lodge for the night. The soft light of a single lantern, charm us into talking long into the night. And so, I learn that karimu, which means generous in Swahili, began with a dance.

Once upon a time, a farmer in a well-made brick house on a hill overlooking Bacho decided to bring the ancient dance of his tribal forebears into the contemporary world. “There are 128 different tribes in Tanzania,” Marseli notes, “and each one has a different culture and form of dance.” Just like many older Americans, he had begun to lament the loss of cultural traditions in a modern world. His solution was to form a dance troupe.

They had been performing 4-5 types of dance that are familiar to the Iraqw tribe in the Babati region when Joas, who had launched a cultural tourism business discovered them. The first tourists he whirled to Bacho to experience Iraqw dance for themselves were the first white persons the villagers have ever seen.

Many tourists came and went until a couple arrived from California in 2007. The first thing Marianne and Don did was to try to dance. Then they began to dance together and try to talk through an interpreter. “Everything changed then,” Marseli continues. “These Americans built a project, but they also built a relationship .” 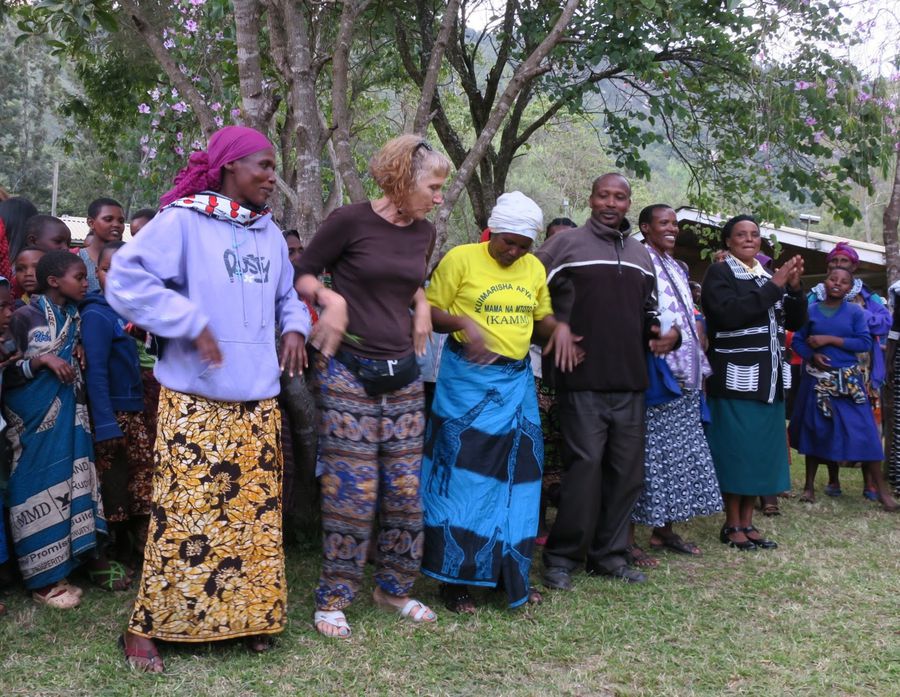 Marianne Kent-Stoll dancing with the community

Scores of volunteers brought by Karimu to Tanzania each summer since 2008 have tried their feet in the dance line. And I get a chance too. The drummer begins to strum a beat, calling us together to dance. First, I just watch. Led by Marseli, eleven dancers in two lines lock arms together, jump up and down and step to the beat of the drum. They sing together in unison and break this routine periodically to lunge forward, arms still locked as though knit together in action, before pulling back into their upright positions so they can resume jumping. For me on the sidelines, it’s all fun and games till Catherine tugs at my hand to pull me into the ring.

I am not terribly coordinated, but happy to try. Every now and then, I find myself in step with the dancers. How do they keep going so long, I wonder as we jump up for the thousandth time? Truly, this is fun! And the families of Bacho laugh with me and clap in solidarity no matter my level of mzungu (white person) skill. Finally, the drumming stops, and I drag myself panting back to my notebook. This tribal dancing is tougher than it looks, I write.

And, just like any effort at international development, the act of stepping into someone else’s world requires delicacy and precision. To watch first, listen to get the beat, and then join only when invited, seems like the way Karimu has conducted business here in Bacho for the past five years. To fall in love with people because, once you get to know them, you can no longer resist how wonderful they really are, across the bridges of place and tongue and tradition. To bring clumsy American good intentions together with skillful African choreography, to join them in their dance–not our idea of it should be–seems like the way of careful listening that Karimu has applied to this community.

Karimu returns every year to continue the dance of cultural exchange and collaborative assistance. As they have told me, they learn far more than they impart. Volunteers of all ages come home transformed forever. They may have learned a few words of Swahili. They may have figured out how to live without electricity. And for sure, to some extent, they will have learned to dance.