Bring clean and free water to all Arri residents

Nothing is more fundamental than water for health and well-being. Today, the ~15,000 residents of Arri ward are either paying part of their meager income toward access to clean water (only available in parts of 3 of the 7 villages) or, more likely, fetching their water from streams or springs often contaminated with fecal matter. According to the United States Center for Disease Control and Prevention, diarrhea kills 2,195 children every day—more than AIDS, malaria, and measles combined. Diarrheal diseases account for 1 in 9 child deaths worldwide. In Tanzania diarrheal diseases cause 8% of deaths in children under five.

Even if not sick, children, particularly girls, are tasked with fetching the daily water needs for the family, often trekking several kilometers up to 10 times per day impacting their ability to attend school or study. In addition, school children must take time away from studying to fetch water. 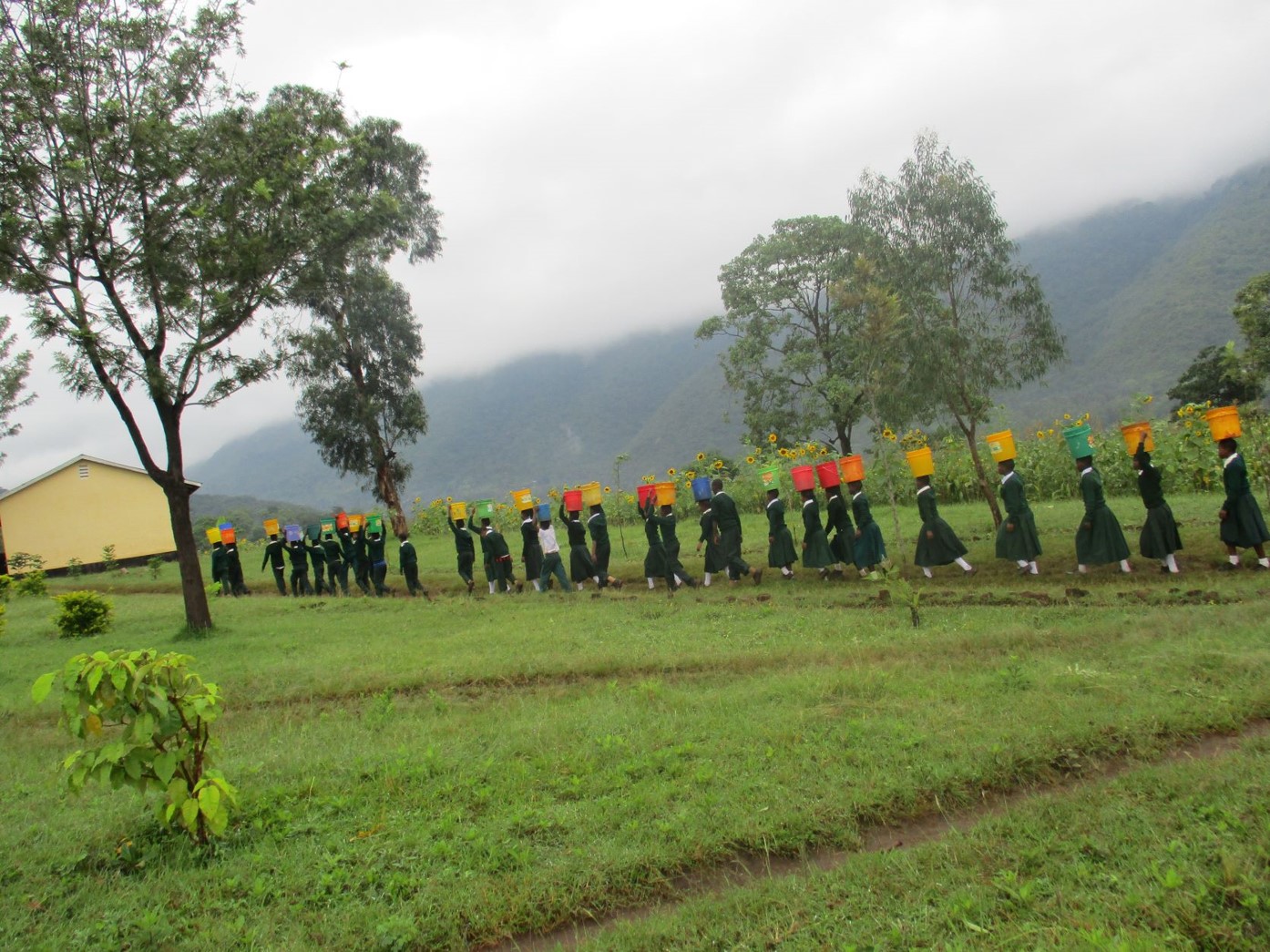 We have seen how bringing clean water to neighboring Ayalagya ward has reduced diarrheal disease by 30%, raised school attendance by 30%, and improved gender equity in education with girls’ school attendance and performance. We also have heard from community members that it has increased their income because they can spend more time in income generating activities such as planting larger areas, tending more livestock,...

Karimu, together with the Arri community, are in the process of bringing free, clean water to within 500m of  the over 4000 households in Arri ward and on site at every school and clinic. We have a signed agreement with the local leadership, regional government, and relevant water district organization on a system design, roles and responsibilities, and construction and maintenance funding responsibilities and have broken ground on the main water intake, sedimentation, and distribution tank infrastructure. 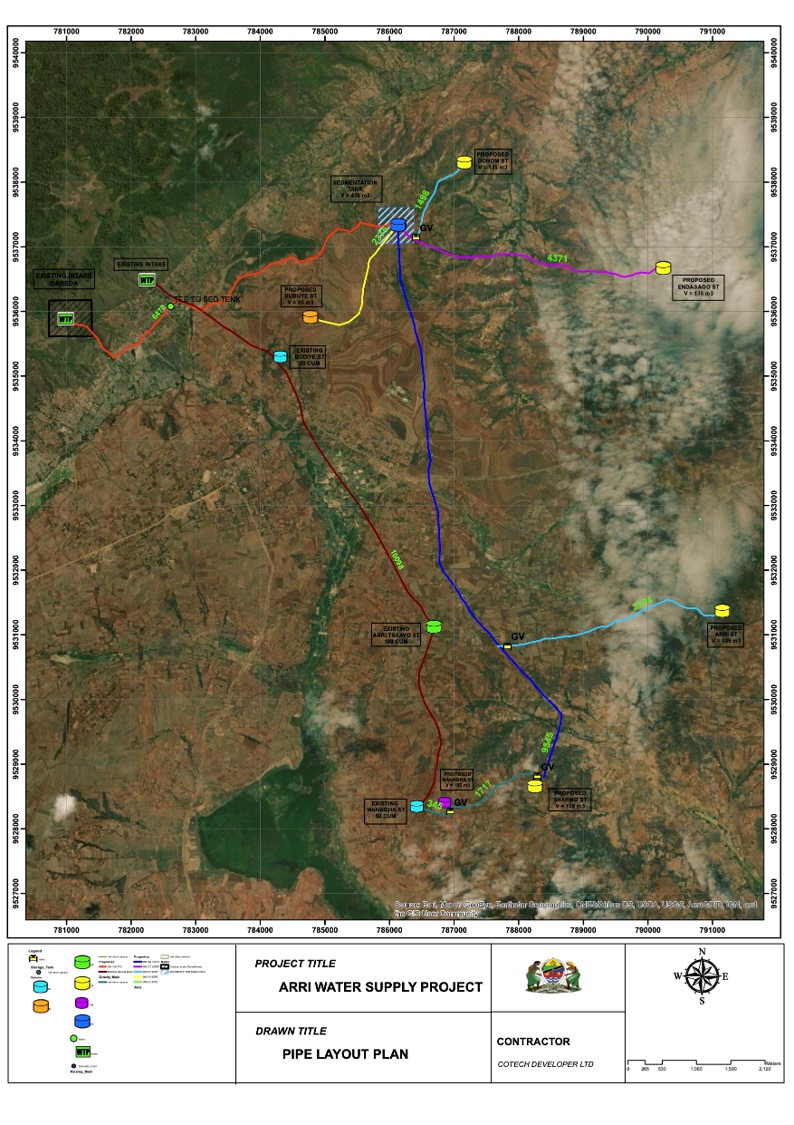 The system will be composed of gravity-driven water pressure from streams high in the mountains. A sedimentation tank (250 cubic meters) will first filter the water of impurities. Then 33 kilometers (20 miles) of water mains will carry water to 11 distribution tanks in each village. From there, distribution lines will run to approximately 150 free, public water points. Those with adequate funds can pay for private water points to be installed on their properties and their usage fees will be used for system maintenance. Public water points may only be used for human consumption - cooking and drinking. In no cases can public water be resold. Livestock and irrigation must come from a different source. A new volunteer-based community water board was created to oversee water usage and system maintenance. They will hire employees to perform regular maintenance checks and professionals to remedy system issues.

The 1st step of the project is to clear the land and dig the trenches to lay the underground pipes that will bring water from the top of the hills to the sedimentation tank in Arri.  On March 1st, 1600 members of the Arri community showed up to work for free (this is part of their $55K contribution to the project). They came with their picks, shovels, strong arms and backs, and community enthusiasm to dig kilometers of trenches!  They cleared 1.7 km  (1 mile) of land approximately 2 meters (~ 6.5 feet) wide from a thick jungle and dug a 1 m (~ 3 feet) deep and 0.5 m (~1.5 feet) wide trench that was also 1.7 km (1 mile) long. Their engagement continues to be extremely high.  Now that the trenches are getting close to Arri and are in a clear, flat area, on March 15th alone, the community dug 4,800 meters (~ 3 miles) of trenches in only 4 hours. Even the Tanzanian engineers who are overseeing the project told us that they have "never seen anything like this" level of engagement. 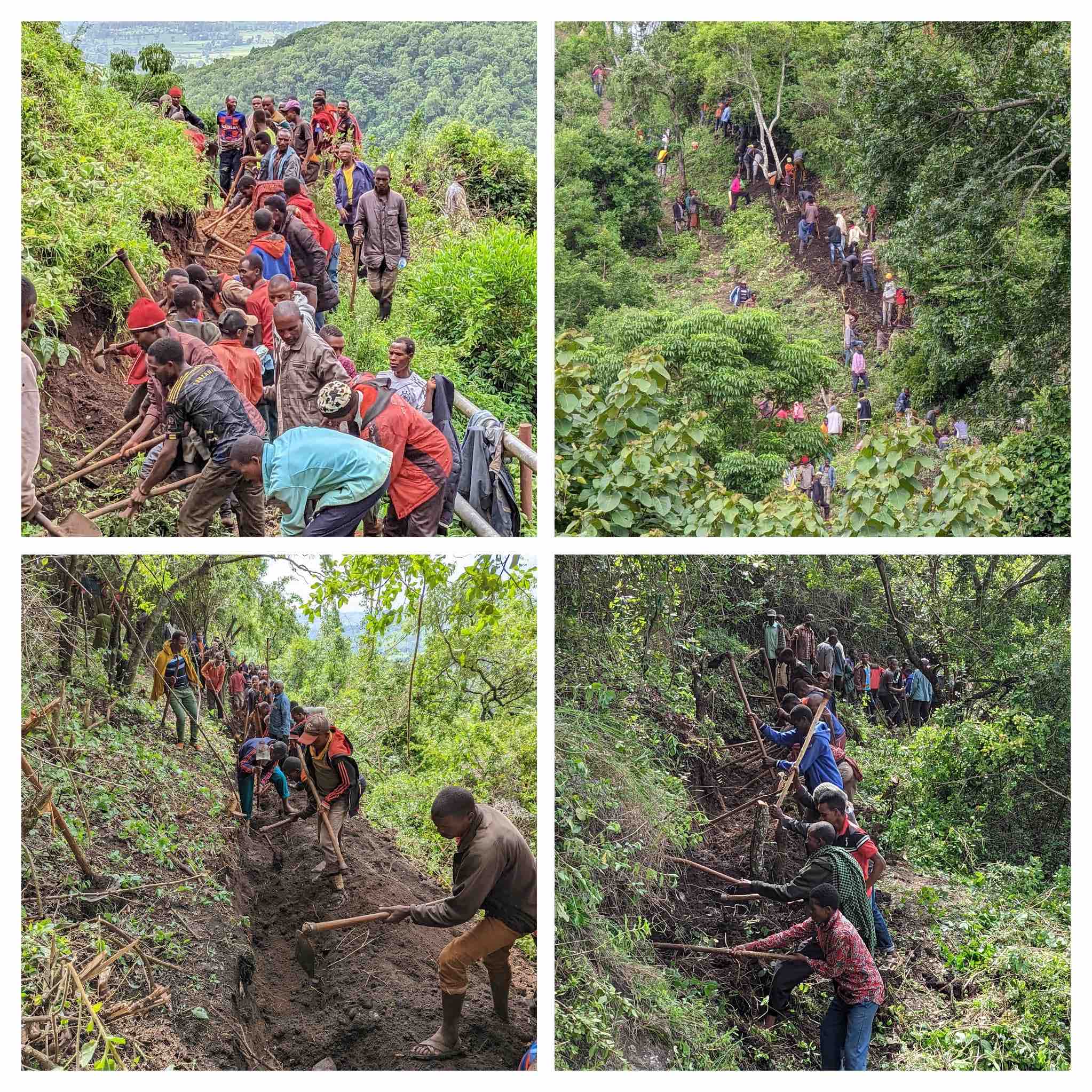 In May, the community had to move the pipes up into the hills over very steep and slippery terrain. Each length carried was approximately 60m long.

In parallel, storage tanks for water distribution are being built in multiple villages. These images are from different villages but show the different stages of construction.