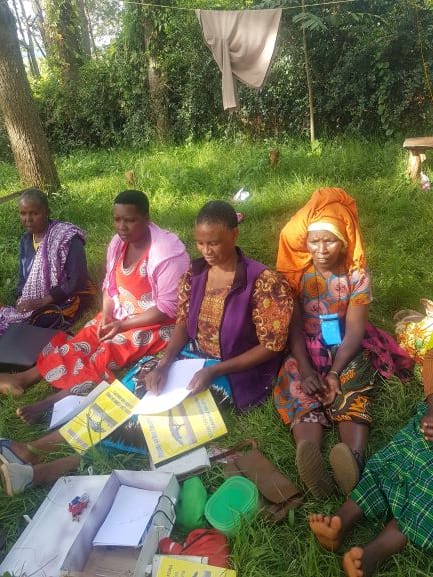 Veronica joined the group 1 year before she became a widow, and had already established a plan to make a living for her family. To reach her goals, Veronica developed the following steps. Her first thought was to buy a diary cow and young sheep. Her goal was to sell milk from the dairy cow, and to sell the sheep when they reached maturity. But before she had enough money to buy a sheep and cow, Veronica had to start small. She took out her first loan in May 2009 to buy seed, pesticide, and fertilizer. She was able to grow tomatoes and other vegetables and sell them for a profit to pay back the loan as well as have some extra cash. Veronica was very purposeful to save money to buy shares weekly, to be able to take out loans from the savings group, and to have a plan for how she would repay each loan. According to Veronica, “Taking a loan is not for starting something completely new, but for improving on what you already know and have.” For example, Veronica already had experience with agriculture growing vegetables with her husband.

Veronica took out a second loan for school fees for her 4 kids. Being a member of a savings group has helped her to keep all 4 kids in school, including the eldest now in boarding school! Quite an accomplishment in itself for a widow.

Veronica has been able to steadily increase her income since she joined the savings group. Over time she has accomplished the following:

Veronica is a strong advocate for savings groups in her community. She is an inspiration to us and to her community as a farmer, head of household, entrepreneur, and community leader. Thank you, Veronica, for sharing your story with us.